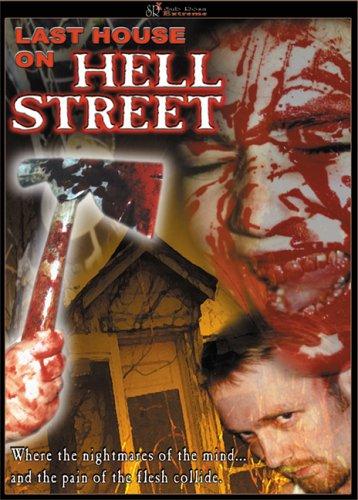 “The Last House on Hell Street” doesn’t seem to know why it exist and plays out as if the creators were writing the script as it was being filmed. Some guy marries some woman and the two decided to have their honey moon in the middle of a field. Seriously, they had no plans beyond laying in a field. The couple luckily comes across an abandoned house, where they take refuge. However, it turns out that this house is actually cursed by the guy’s mother, who became a ghost after she was murdered by the guy’s father. Apparently in this universe, being murdered causes your face to become distorted by cheap color effects. The guy then goes crazy (Jack Nicolson in “The Shining” style) and tries to kill his wife. Luckily for the woman, her husband turns out to be completely incompetent at the art of murder. I guess he did not inherit that skill from his father. Somehow the woman manages to kill her husband, causing the house to re-birth him. I’m not kidding. This house literally grows a womb and gives birth to a dead man. The couple then walk off into the sunset together as if nothing ever happened. This is by far the worst film by Eric Stanze that I’ve seen. It’s boring, makes little sense, and is just plain weird at times. The plot consist almost entirely of the characters trying to find things do, just to transition to the next scene. Luckily even Stanze himself admits this movie is terrible, so it shouldn’t be used to judge his films as a whole. Still, “The Last House on Hell Street” manages to be one of the most bizarre films I’ve seen in awhile. Unfortunately, it does not manage to be entertaining.