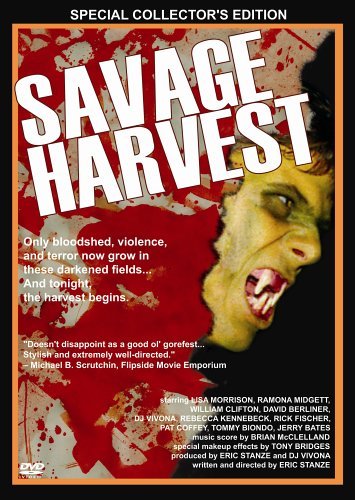 Director Eric Stanze has become infamous for taking a minuscule amount of resources and turning them into art. His most famous (and in my opinion best) film “Ice from the Sun” managed to be both visually impressive and unique despite having virtually no budget to work with. “Savage Harvest” was created five years earlier, and it’s clear to see that Stanze was no stranger to stretching limited resources to do amazing things. The characters in this film were likable, even if underdeveloped. Most of their relationship conflicts were less than interesting and worked mostly to set up the plot. This is typical of slasher films, so I won’t hold it against this film in particular. Once the slaughtering began, this movie became a non stop Gore fest that actually took some unexpected turns. The ending was a bit confusing, as I’m not entirely sure what happened to the surviving character. Still, it did seem to tie the film together, while adding a much appreciated element of mystery. Savage harvest doesn’t offer much as far as originality. However, it manages to be an entertaining horror film, with enough realistic blood and gore to satisfy any seasoned gore hound.