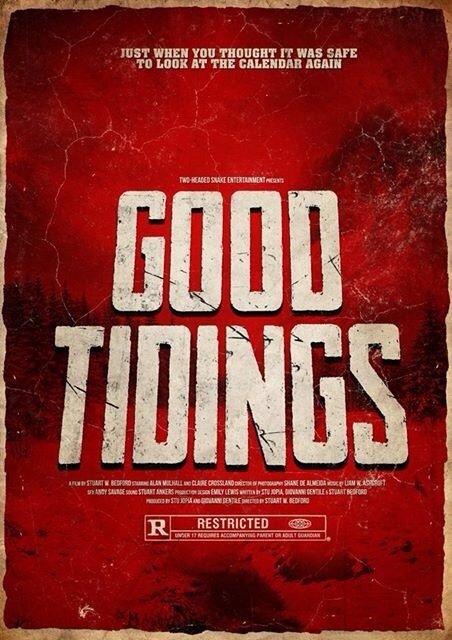 I don’t exactly know what is about the combination of Christmas and horror that goes so well together. Maybe it’s the fact that after so much cheer, one can’t help but crave a bit of senseless slaughter. “Good Tidings” is about a group of homeless people, locked in a court house who are hunted by three seemingly mindless killers, each dressed as Santa Claus. While the three psychotic, serial killer Santas are silent throughout the film, you manage to get a sense of their individual personalities through their interactions with each other and their victims. The smallest of the three “Curly” seems to simply be following orders from his superiors and doesn’t appear to understand the permanence of death or the consequences of his actions. He is child like and almost sympathetic. The second in command displays the most amount of blood lust, killing indiscriminately and without mercy. The leader and largest of the three attempts to keep the other two in line, demonstrating some kind of intelligence and sense of awareness that the other two lack. The three killer Santas have their own conflicts and at times fight among each other as opposed to their victims. All this is shown through non verbal gestures, that manage to make these three even more terrifying and unpredictable. The idea of having the victims consist of the homeless and former drug users gave “Good Tidings” a level of depth absent from typical slasher films. Seeing the victims being slaughtered by the embodiment of Christmas serves as a metaphor for just how cruel and unfair the holiday season can be to the less fortunate. At the start of the film, the homeless are brought together by a war veteran, who attempts to provide them shelter as well as help with their various problems with addiction. A great scene within the first twenty minutes of the movie shows the veteran talking to a former heroine addict. The veteran explains that he had lost his wife and child long ago and hopes to dedicate his life to helping others. The veteran represents the true altruistic meaning of Christmas, while the three killer Santas represent the materialistic and self serving side of the holiday season. The Santas treat the homeless like objects that exist only for their amusement. The use and break them, like children playing with toys, only to discard them when they get bored. On the opposite end of the dichotomy, the veteran cares only about saving as many people as possible and shows great remorse for those he fails to save. It’s easy to find a slasher with nothing more than gratuitous gore and violence, but it’s less common to find one with an strong underlying message. “Good Tidings” manages to supply enough blood to satisfy most seasoned gore hounds, while managing to serve as an insightful social commentary.

This entry was posted in Written Reviews.